Celebrate May Day, Defend Our Neighbors 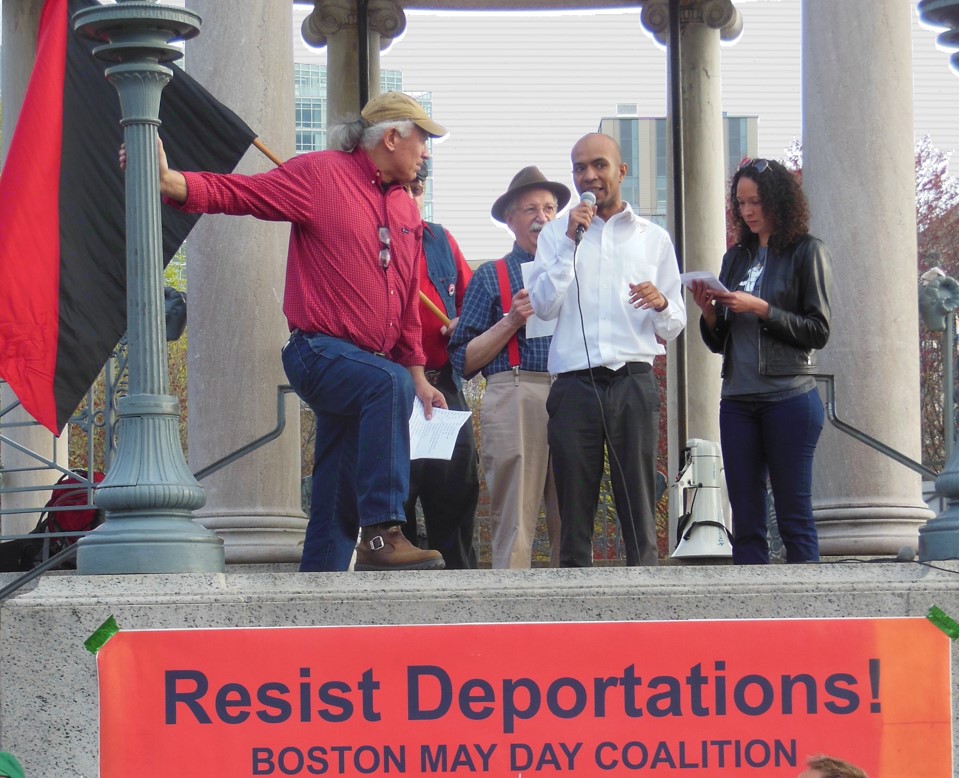 Over the last year we have seen a massive assault from the Federal government on every kind of program and protection. From the lackluster response to Hurricane Maria in Puerto Rico, to the opening of the Alaska’s Arctic National Wildlife Refuge to oil and gas drilling, it seems we can take nothing for granted anymore.

A broad-based unity among the working and oppressed peoples of the United States is absolutely essential to our fight back. This is why the corporate oligarchy that funds our political system and owns the mass media are hard at work to sow divisions among us. The leading edge of this campaign of division has been a massive attack on our immigrant neighbors. Over the last year we have seen a 43% increase in arrests from ICE (Immigration and Customs Enforcement). Many of these arrests are happening outside court rooms, federal buildings, schools, and workplaces. These tactics create a climate of fear that makes our immigrant neighbors more vulnerable to exploitation and crime.

Last fall Trump announced the end of DACA, Deferred Action for Childhood Arrivals, which has provided temporary legal status for 800,000 undocumented youth who were brought to the US as children and know no other home. These Dreamers occupied congressional offices across the country to demand a permanent fix as part of a necessary bill to fund the government. After a couple days of posturing, the Democratic Party completely caved to Trump without winning anything for undocumented youth.

Another 400,000 people from 10 countries are in the United States under TPS (Temporary Protective Status). One by one, Trump is rolling back TPS for immigrants from Nicaragua, Haiti, El Salvador, and Sudan. In many cases, these immigrants came to the US to escape natural disasters or civil war. Just last Thursday, US Citizenship an Immigration Services announced the cancellation of TPS for 9,000 Nepali immigrants three years after an earthquake in Nepal killed almost 9.000 people. Both DACA and TPS are band-aids that leave immigrants unable to plan their futures. They also keep the movement divided as each nationality or age group faces crises at different times. While Democrats drive a debate over which immigrants are deserving, it is clear that the Trump administration is opposed to all immigrants and immigration policies. In order to build a movement with the massive participation necessary to move Congress, we need to stand with all 11 million undocumented immigrants, and the 13% of the United States residents who were born abroad.

Politicians from both corporate parties cry crocodile tears for the plight of Syrians, yet would rather drop bombs than welcome refugees. Trump put a 120 day freeze on admissions for refugees last year. For 2018, the administration has set a cap to admit only 45,000 refugees for the entire year. This is the lowest quota in decades.

Trump’s ban on Muslims traveling to the US is now back in front of the US Supreme Court for a third time, tweaked to include North Koreans and government officials from Venezuela. In Trump v Hawaii, the constitutionality of the policy hinges on whether Trump is motived by religious animus. Relying on the courts to protect us is like rolling dice. Congress ought to act to take such sweeping powers away from any president.

Massive protests like the Women’s March and the March for our Lives have shown that millions of people are ready to mobilize. Unfortunately, these mobilizations have been closely tied to the Democratic Party. We have to be clear: Being anti-Trump is not enough! Older activists will remember, the anti-war movement relied heavily on criticizing Bush, yet when Obama took office he led a troop surge in Afghanistan and expanded drone attacks across the Middle East. Immigrants who mobilized massive rallies in 2006 to demand comprehensive immigration reform were abandoned by the new Democratic Party majority in Congress. This is not merely about a lack of moral courage. This is what happens when we have two political parties fully funded by, and cut from the same cloth as, corporate America. People are fed up. But the alternative is not to give up on politics!

Massive protests bring new people into the struggle, help them understand the issues, develop organizing skills, and build political networks. But this is only the first step. To challenge those in power, we must move from protests to building power. We need a political party that can unite people with various specific grievances into the general struggle for democracy, justice, and freedom. In Massachusetts, our best opportunity to build power is with the Green-Rainbow Party. At both the state and local level, the Green-Rainbow Party offers candidates who don’t take money from lobbyists or PACs. We are a party of community activists. By offering viable candidates at the ballot box we can shift the entire political debate and expand what people imagine is possible.

The Green-Rainbow Party calls for an end to deportations and a pathway to permanent legal residence for all. We support sanctuary policies to block state and local cooperation with ICE. We advocate for instate tuition for immigrant students who graduate from our high schools, and drivers’ licenses for all who can safely operate a vehicle. The Green-Rainbow Party has chapters across Massachusetts that are ready to lead the way forward for immigrant rights, and a new kind of politics that puts people, peace, and the planet before profit!

Join Green-Rainbow Party candidates Juan Sanchez, Jamie Guerin, and Jed Stamas for their Boston campaign kick-off at 3:45pm on Tuesday, May 1, at the Statehouse! Then join us for the May Day rally at 5:00pm on the Boston Common and march to Copley at 6:30pm. We will have a party to thank volunteers afterward at Tent City, 130 Dartmouth Street.