The 2021 Campaign to Guarantee Health Care for All in Massachusetts 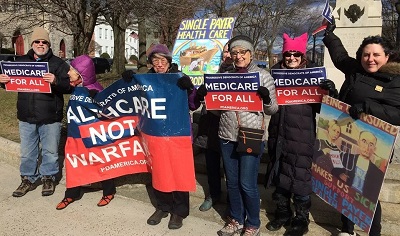 The Act Establishing Medicare for All in Massachusetts (House docket H. 1267 and Senate bill S. 766) will guarantee equitable health care access for every resident of the Commonwealth through a single payer health care financing system.

The impetus for state provision of universal healthcare is a direct descendant from ideals formulated during the historical period termed “The Enlightenment”, which were further developed during the period of the American Revolution and the French Revolutions.   Subsequent periods of social liberalism have instituted universal health care as a standard in many of the social democratic nations of western Europe as well as some of the less traditionally “western-liberal” nations throughout the world.  But not in the United States.  In fact, the United States currently outspends other countries per capita with “worse outcomes”.  Sadly, the building of the current movement toward a Massachusetts state-based single payer health care system for all is largely founded upon the failure of our federal government to bring such a plan into place.

Perhaps the primary justification for the ongoing effort at the state level is the fact that there is no credible effort to bring a vote for Single Payer before the US Congress this year – nor likely next year.  Even if there was such a vote, the likelihood of its passing seems remote.  Yet each passing year shows us how the current Affordable Care Act is neither affordable nor universal, nor even acceptably effective: that plan does not improve individual healthcare in any significant way, is extraordinarily expensive, and still leaves many millions of people with no insurance whatsoever.

On June 24th, 2021, the Administration Committee of the Green-Rainbow Party voted unanimously to join the Mass-Care coalition. The Massachusetts Campaign for Single Payer Health Care (known as Mass-Care), is a statewide activist umbrella organization that has dedicated itself to bringing about a universal single payer health care system since its founding in 1995.  All residents of the state of Massachusetts would be covered under this plan, even if they are traveling and receive care out of state (for which they would be reimbursed).  The plan also supports funds for the institution of a foundation managing capital deployment in the improvement of our healthcare infrastructure.

The resolutions, submitted at each legislative session over 25 years, have been defeated by legislators representing private health care insurers and providers. This does not diminish the need and the urgency to pass this legislation this year.

Mass-Care’s mission is to establish a Single Payer health care system so that all residents of the Commonwealth will have access to comprehensive, quality, affordable and equitable health care because it is basic to life and human dignity.

The paths stated above are implicitly required under Massachusetts State Law.  Article VII of the Constitution of the Commonwealth, State of Massachusetts reads:

“Government is instituted for the common good; for the protection, safety, prosperity and happiness of the people; and not for the profit, honor, or private interest of any one man, family, or class of men”

Thus we can see that the proper goal for government in the Commonwealth of Massachusetts must be the common good of the people, not the support of private interests such as insurance companies.   The common good includes “protection, safety, prosperity, and happiness”.  Clearly, good health care figures preeminently in each of these areas.  Thus Medicare for All should be seen as the duty of government in Massachusetts while no better national plan is in place.

Why Not Concentrate on a National Plan?

A powerful argument for a Massachusetts Medicare for All is that a successful implementation will serve as a model and impel other states to do the same – inevitably leading to a nationwide system.  And federal Single Payer probably will never happen without the leadership of state successes. Some critics will put this argument on its head and claim that a state-based system could somehow serve as an impediment to national adoption.  That claim is disproved by the very existence of the ACA which began as a state-based plan in Massachusetts.  Mass-Care and most other state-based Single Payer movements are directly part of the movement for a federal Single Payer.

However, there are powerful, well-funded forces lined-up against the passage of Single Payer Health Care at all levels of government.  Much of that opposition is well hidden.  In 2020 alone, CVS Health and its subsidiary, Aetna Insurance, provided $5,000,000 to a “dark money” group to lobby and advocate against proposals such as Medicare for All.  Obviously, the only defense is a rigorous ongoing campaign to discredit media manipulations.

Despite the lavish financing and intense lobbying against Single Payer health care, the public support has only increased and diversified in the time of the pandemic.  Recently, Representative Ayanna Pressley cosigned Representative Ro Khanna’s bill to provide states with access to the federal funding and regulatory flexibility needed to implement universal healthcare programs.

It is unlikely that our Republican governor would sign such a bill upon passage, so the results in the next gubernatorial election will be critical in this regard.  Politically, at the grass-roots level, The Act Establishing Medicare for All in Massachusetts is well supported, and our state legislators are starting to feel that groundswell.  Currently, there are 68 (out of 200) state house members supporting it, with a goal of 90 when the bill has its hearing in October.

The Green-Rainbow Party Must Step Up

When we see what is at stake here, how many people and groups are involved – and what is being accomplished - we can see why it is incredibly important that the Green-Rainbow Party become more involved with this issue.   Mass-Care has organized “hubs” for neighbor-to-neighbor outreach, public education, and lobbying where Greens can join with other local Single Payer activists in timely lobbying their representatives.

Healthcare, so central to people’s well-being, is precisely what the Green-Rainbow Party must be about – and we must make active involvement in the effort for passage of Medicare for All in Massachusetts our duty.