Act to Stop the War in Syria! 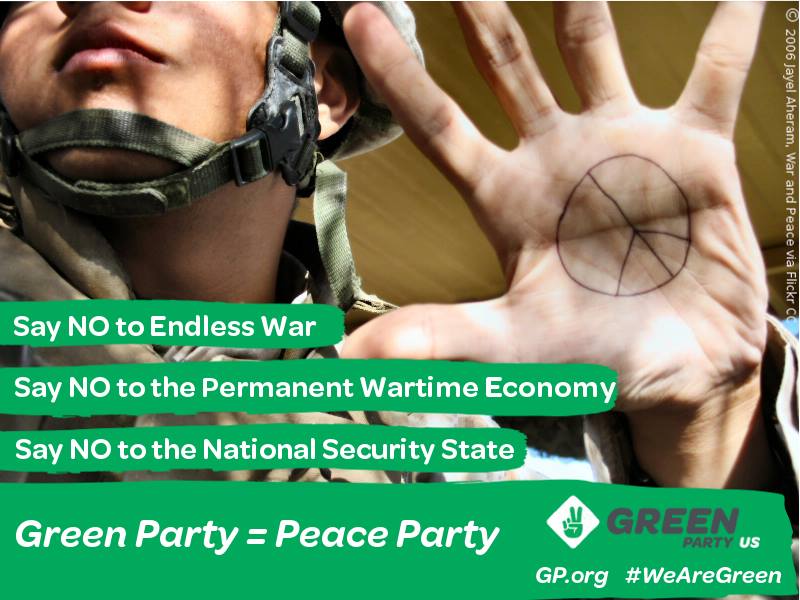 The Green-Rainbow Party of Massachusetts endorses April 14th Tax Day mobilizations across the state to protest tax cuts for the rich, military spending, and the escalation of conflict in Syria.

The politicians in Washington DC have a bipartisan consensus to mobilize for war and funnel more wealth to the rich.  President Trump has threatened missile strikes against Syria over Twitter, despite the presence of Russian forces.  The risk of this conflict escalating out of control is dire.  Far from being a voice for peace, Democrats have ramped up their McCarthyite rhetoric by accusing Trump of being too soft on Russia.

One way to cut off Trump's march to war would be to cut off the funds.  The federal discretionary budget invests 54% of spending in the military and nuclear weapons.  Democrats quietly folded any opposition to the budget, even failing their promises to defend immigrant youth that will lose protection when the administration ends the Deferred Action for Childhood Arrivals program.

Accusations of chemical weapons use by the Assad government have proven false in the past.  But even if true, there is no legal or ethical justification for US military intervention.  US military interventions have been a disaster for people all over the Middle East and North Africa.  The Green-Rainbow Party stands in solidarity with the people of Syria who depend on peace as a prerequisite for exercising their freedom and sovereignty.

Federal government funding for domestic programs are being squeezed by tax cuts for the rich and a ballooning military budget.  The two corporate parties in Washington will use budget deficits to justify more cuts for vital programs that serve working class people.

This Saturday we will mobilize in protest for peace and tax justice.  The broadest possible unity in action will be necessary to prevent an impending war.  But we also recognize that registering voters and running candidates to build an independent voice at the ballot box will be necessary to move our struggle beyond responding to emergencies and toward a government for the people.

To coordinate our participation in these actions, contact your local chapter (see http://www.green-rainbow.org/locals), or reach out to us at [email protected] or call 413-650-6542.