Elephants in the Room -The Insatiable Twins 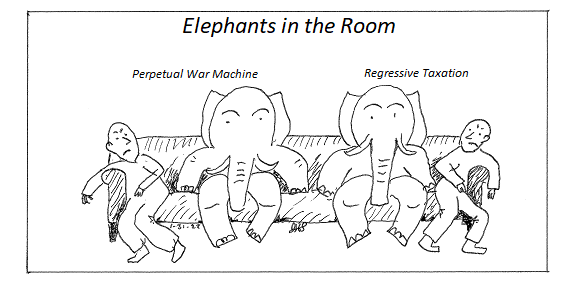 The US COVID pandemic demonstrates our American healthcare failures. From whence does this failure arise? The recently approved Federal Budget includes $1.68 trillion for discretionary (non-mandatory) spending.  Of this, $830 billion is slated for the Department of Defense ( $778 billion) and Homeland Security ($52 billion)  This does not include Veterans Administration’s costs for healthcare for the physically and mentally impaired veterans of our foreign interventions and wars. Collectively, these costs are an ever-increasing one that comes out of diminished resources for the country’s education, housing, environmental protection, national infrastructure, and as we are now sorely experiencing our country’s healthcare system.

Add to this, the 2017 massive tax decrease for corporations and the wealthiest Americans ($150 billion/year–$1.5 trillion/10 years) and we get a clear picture of the reasons the American working class and poor feel put upon because they are.

Nothing could more clearly state the priorities of the American ruling class than this cold cash demonstration of preference for war and political obedience to the wealthy. The true needs of the people are increasingly neglected as our systems crumble around us.

How much longer will we permit elephants in the room to smash our public health (witness our deplorable pandemic response by Democrats and Republicans),  destroy public education (high stakes testing and unequal public funding, a joint effort of Republicans and Democrats), accept increasing climate catastrophe (lack of committed leadership by both corporately owned mainstream parties) and perpetuate social, political and economic injustice via self-serving political drama.

Who are these elephants? As we have already identified, they are Regressive Taxation with trillions of dollars of tax relief going to the already wealthy and its insatiable twin, Perpetual War Machine, teetering on the brink of nuclear war on opposite sides of the globe and costing trillions more.  This is madness, supported by Democrats and Republicans, leading to the demise of our country.