We Stand with Julian Assange and Freedom of the Press

Julian Assange of Wikileaks is a political prisoner who must be freed. Nothing less than the freedom of the press in the United States is now at risk. The initial charges currently brought by the US government against Julian Assange are absurd and dangerous when seen in the context of Wikileaks’ publication of vast troves of authentic, ground-level information documenting manifold instances of institutional malfeasance, including systemic war crimes perpetrated by the US government itself.  Behind a veil of national security the US government keeps secret vast amounts of information which the public should have a right to know. Without transparency, the levers of accountability become meaningless. 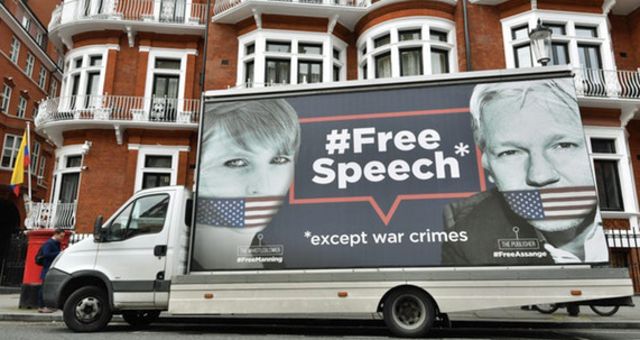 Assange did what any good investigative journalist does: pursue sources.  There is no evidence that he did anything more. The Justice Department criminalizes journalism by accusing him of stealing government secrets.  Ironically, the US government claimed to not have any charges against Assange until the indictment was accidentally leaked last November. He will be prosecuted – and persecuted - probably for the remainder of his life. The real criminals who are in power have instituted and refined laws such as the Espionage Act designed to hide their crimes. They are now setting to use these laws to devastating effect.

Wikileaks has been challenging the power elite for over thirteen years, and has published a long series of astounding revelations - but here in this instance, with the arrest and serial prosecution of Chelsea Manning, a pseudo-case has been assembled against Assange. Chelsea Manning leaked large quantities of information vital to the public interest, and along with this was able to release film footage showing actual war crimes conducted during the US occupation of Iraq. Wikileaks, and Julian Assange were apparently in communication with her during some of the acquisition of this information and its subsequent transfer. Instead of prosecuting the war criminals, our morally bankrupt Justice Department is attempting to extradite Julian Assange from the UK.

The charge being made against Assange is that he “conspired” to access government computers. But Manning did not act under the direction of Assange. Reasonable people would consider Julian’s part to be essentially investigative journalism: receipt of information for publication is journalism.

It is important to the prosecution of Assange that he not be allowed to defend himself. Assange will not be able to bring meaningful information to court. Otherwise he could make a case that he has been conducting journalism by supplying vital information about the conduct of war crimes. A true hearing of facts would vindicate him. Meanwhile, to cover over the ongoing unjust proceedings, the intelligence “community” has activated its agents and assets, posing as independent analysts for the mainstream media. We will continued to be regaled with many absurdities about Assange in the coming days. We must remain aware that if Assange loses this case so does the entire foundation for a free press.

It is the intention of the Green-Rainbow party of Massachusetts to stand alongside muckrakers, civil libertarians, peace activists, and all who value truth and transparency for a free press and the release of Julian Assange.

Stand up for Assange and Manning on World Press Freedom Day