Some 120 Greens from around the nation gathered at the University of Iowa in Iowa City July 24-27 to talk strategy, learn new skills, celebrate victories, and plan the future of the Green movement in America.  The 2013 Annual National Meeting included workshops, films, speeches, and lots of face-to-face interactions.  The developing Green Party strategic plan was briefed and reviewed.  A luncheon address by Presidential nominee Jill Stein was a highlight.  An evening fundraiser at the Trumpet Blossom restaurant provided a boost to Green Party coffers.  Everyone left with new ideas and new enthusiasm for the ambitious plans of the party.

David Sacks, the Green Party Fundraising Director, gave a fascinating, fact-filled presentation on the Party's recent fundraising activities.  The Green Party has rebuilt its financial foundation since a funding crisis in 2009.  Donations are up, although the party has few deep pocket donors (The largest donation received last year was only $2500).  Sacks considers any donor who gives more than $500 to be a "major donor". But despite the hard times being experienced by many nonprofit groups, the Party did manage to increase its income slightly last year.  According to Sacks, the donors recruited by the presidential campaign were critical to last year's fundraising success.  41% of the donors for the past year were giving to the Green Party for the first time.  And 60% of those new donors were recruited directly from the donor lists of the Jill Stein presidential campaign. 57 of 92 new sustaining donors came from the Stein lists. Sacks feels that increasing the number of sustaining (monthly) donors is important to building a solid fundraising capacity.  Sacks noted that a promising opportunity can be seized if the Party can find more volunteers to make follow-up telephone calls to donors.

A three-hour workshop discussed how the Green Party can best provide support to its candidates at all levels.  Tia Nowack and Matt Kozlowski, staffers for the Stein presidential campaign, described a "Campaign in a Box" that they are developing that will give candidates a package of ready-made forms and software to get them off to a quick start.  Scott McLarty, Green Party Media Director, emphasized the importance of each state party and each campaign having a media strategy.  McLarty offered to provide media lists to state parties upon request.  John Andrews, co-chair of the Massachusetts Green-Rainbow Party,  discussed the role of candidate support committees.  Six state parties now have active working committees dedicated to candidate support.  Tia Nowack described the Green Campaign Schools that the Stein campaign has organized in a number of states.  Jim Ivey from the Minnesota Green Party noted that a phonebank can be set up anywhere with "headsets, Google voice, and laptops".  Hillary Kane, co-chair of the Coordinated Campaign Committee (CCC) announced that the CCC is recruiting state liaisons who will help the CCC get national resources into the hands of state candidates.

One workshop was devoted to a debriefing on the 2012 presidential campaign. The achievements of the campaign were noted, as were areas where improvements should be sought for the future.

Cheri Honkala had great success in recruiting anti-poverty and economic justice activists to the Green Party, and several new locals were launched in the Philadelphia area.  Jill Stein got very significant media coverage in the online and cable media although corporate media mostly tried to ignore the campaign.  The Green Shadow Cabinet grew out of the campaign.

Difficulties encountered in 2012 were discussed and several ideas were offered for improving future campaigns.  In the first phase of the campaign, the Stein staff had to devote most of their time to ballot access and qualifying for federal matching funds.  This meant that several important outreach tasks were delayed until mid-summer.  The Stein campaign provided over 80% of the funding for Green Party ballot access efforts, spending about $243,000 on this alone.  Communications with state-lev 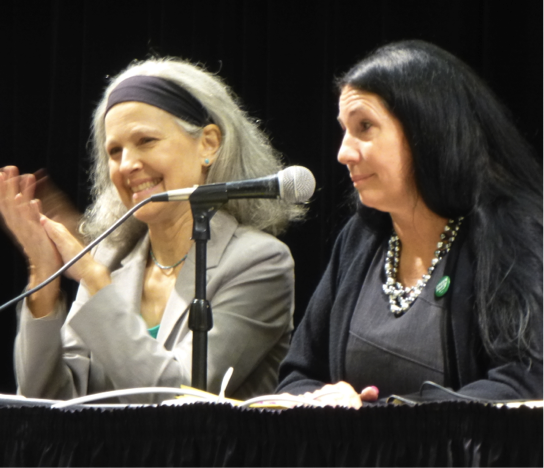 el volunteers was often inadequate, especially when the small team of staffers were preoccupied with multiple simultaneous ballot access battles.  One lesson for the future is that the Party needs to contribute more to ballot access work so that the candidates are free to focus on their campaigns.

It was suggested that when there is a hotly contested race for the nomination, the Green Party should seek ways to lower the cost of primary campaigns, so that Green candidates do not exhaust their funds in running against each other.  Some ideas for doing this are to base the primary campaign more on candidate debates, to seek agreements to avoid media purchases, and do joint mailings.

In the last year the new Kentucky Green Party won accreditation as did the national Youth Caucus which now has 800 members.  A Latino Caucus appears poised for accreditation.  Greens are major forces in the national opposition to fracking and to the Keystone XL pipeline.

Jody Grage, co-chair of the Ballot Access Committee, said that the Green Party hoped to be on the ballot of 45 states in 2016. She urged state parties to "defend your ballot lines" so that the Party could enter 2016 with as many ballot lines as possible, and thus be able to focus its resources on a smaller number of states where signature collection is needed or legal challenges are justified.

Tamar Yager said that the Green Party should make an effort to qualify for FEC matching funds early in the 2016 race - perhaps as early as April.  This has several advantages, including allow the campaign to ramp up sooner, and providing a longer fundraising period in which donations will be matched. 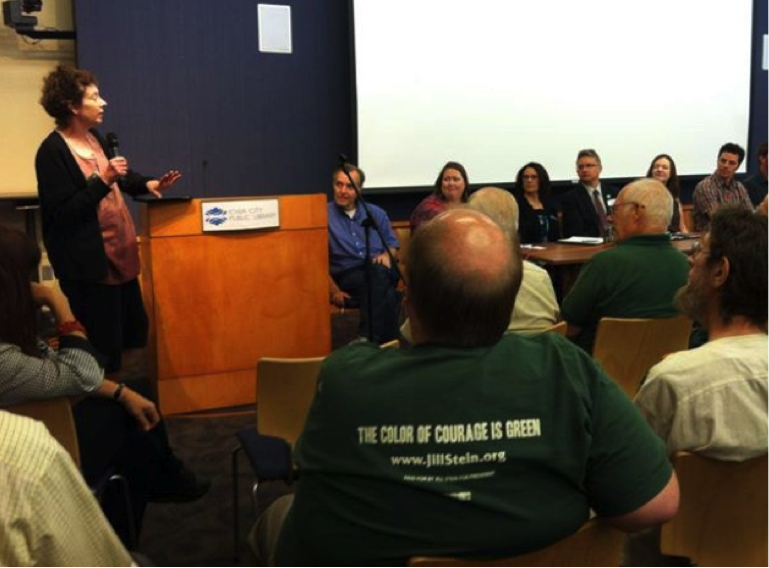 nel of Green office holders discussed strategies for electoral success at the local level.  Currently there area about 350 Greens holding elected office in the United States.  A good way to get started in local government is to seek appointments to commissions and boards.  There is interest in assembling a collection of local ordnances that Greens can introduce at the local level.

It was not surprising that in discussing their work, members of the National Committee expressed dissatisfaction with the National Committee listserv which is plagued by all the typical problems of unmoderated email lists, such as too much discussion of non-relevant topics and unproductive squabbling.  Several ideas for improvements were offered, and there is interest in moving to a new software format such as a forum which might allow business to be conducted more efficiently.

Tom Yager, co-chair of the Presidential Campaign Support Committee (PCSC) answered questions during a discussion of the 2012 nomination process.  Attendees discussed the process by which candidates were officially recognized as candidates for the nomination and had their names placed on primary ballots.  Some attendees wanted more clarity in the requ 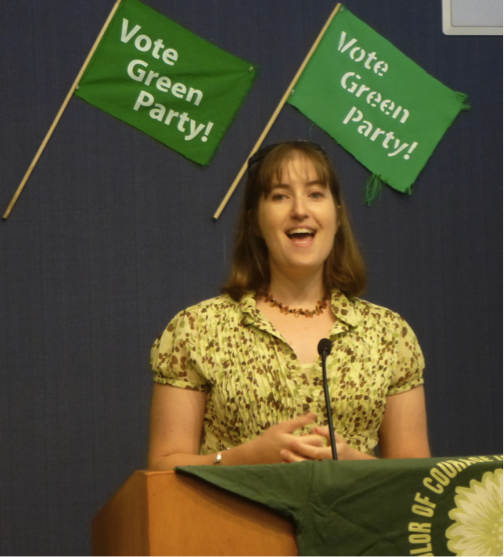 irements for recognition, and stricter application of the rules for ballot access.  It was suggested that in the next election,  recognition should, in part, be contingent on achieving a specified number of individual donations from Green Party members.  The current requirement to collect 100 supporter signatures was not very meaningful since candidates were permitted to collect signatures via broadcast mailings to email lists.  It was suggested that the nominating convention should be held as early as possible, but Yager noted that it could not be held until after the last major state primaries (CA and TX) in late June.

Hillary Kane, co-chair of the Coordinated Campaign Committee and the ANM Committee, received accolades for her work during the previous year

Online social media are proving extremely useful to Greens, and the number of Green Party followers on Twitter and Facebook shot up over the past year.  Starlene Rankin, co-chair of the Media Committee,  offered to provide training for Greens in the use of tools such as Twitter and Facebook. 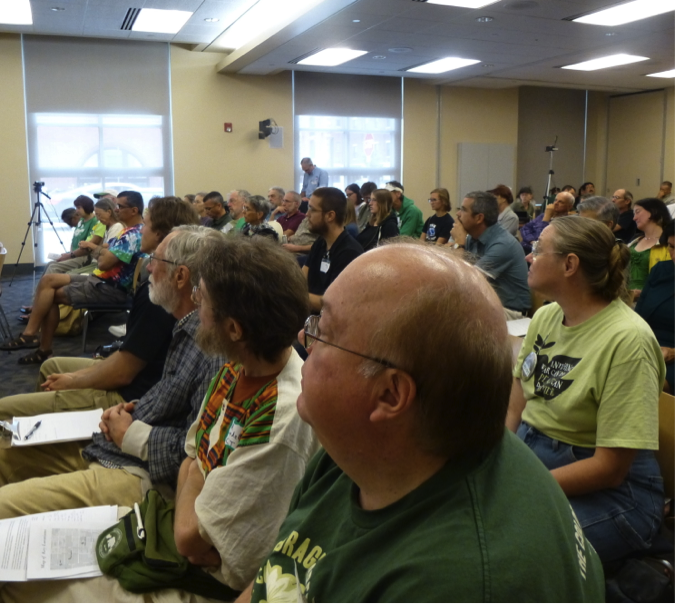 Jill Stein described the Green Flags initiative that makes visible the Green presence at parades and rallies by having Greens carry small green flags that say "Vote Green Party".  The flags can be made for less than 75 cents apiece.  The initiative began in Massachusetts but is now being picked up in several other states.
Special thanks were offered to Hillary Kane and Tamar Yager for their work as ANM Committee co-chairs, and to all the Iowa Greens who worked hard on ANM preparations and transportation.

Attendees found that ideas, information, and inspiration were plentiful at the ANM workshops

2013 Vice-presidential candidate Cheri Honkala introduced Jill Stein, who gave the keynote address a luncheon on Saturday.  Stein noted that distinct but related democratic movements are emerging around the nation, each seeking solutions that are being blocked by establishment politics.  Stein mentioned the climate movement, the occupy protests, the Keystone XL protests,  foreclosure protests, the support for whistleblowers like Bradley Manning,  the protests against NSA spying, the movement to end corporate personhood, the strikes of low wage workers,  and other.  Citizen movements in Turkey, Egypt, and Greece are international echoes of the same struggle against entrenched economic powers.  Often these movements become visible through protests that flare up and fade away.  The mission of the Green Party is to give such movements a political vehicle that leads to permanent democratic empowerment.  Stein said that in 2012, doors began to open for the Green Party that were never open before.  More and more, the Green Party is being seen as a key ally in achieving the aspirations of the people.  Stein urged the Green Party to seize the day and provide the leadership that the times demand.