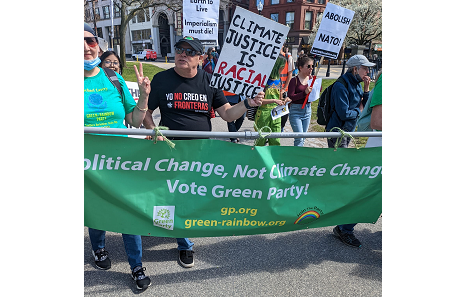 Greens from across Massachusetts joined nearly 200 activists at Park Street Station on Earth Day. They demanded immediate action on the converging crises threatening our survival on the planet - climate collapse, endless war, crushing inequality, and an assault on democracy.

The demonstration was organized by the GRP, Mass Peace Action, Extinction Rebellion Boston, and the Party for Socialism and Liberation. Groups came together across a wide spectrum of peace and justice issues to speak out and build solidarity for the long haul on the interlocking crises facing workers, the marginalized, and everyday people in Massachusetts. Other co-sponsors included the Poor People's Campaign, the New Democracy Coalition, Boston Assange Defense, the May Day Coalition, the Revolutionary Blackout Network, the Jericho Movement, BDS Boston, the Smedley Butler Brigade Chp 9 Veterans for Peace, the Raytheon Anti-War Campaign, HERO Nurturing Center and others. (Go here for a full list of organizations.) 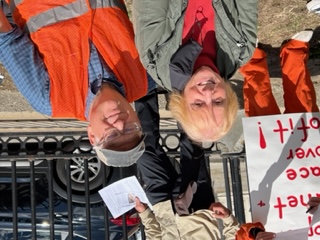 A large contingent marched to Copley Square to join a group of hundreds at Extinction Rebellion's Freedom from Fossil Fuels tour. The tour held die-ins at the headquarters of leading climate profiteers blocking urgently needed action in Massachusetts to stop climate change. They are:

- Eversource, a gas and electric utility corporation, spent 2.2 million dollars on anti-climate lobbying between 2013 and 2018. Eversource is also building a new electrical substation dangerously located on a flood-prone site by Chelsea Creek, next to tanks of jet fuel. This is despite 84% of Boston having said NO to this risky project in an already overburdened area of environmental injustice.

- Associated Industries of Massachusetts, (AIM), which lobbies in line with the energy companies to stop climate legislation. AIM spent over 2 million dollars lobbying between 2013 and 2018.

- Ropes and Gray law firm, which advised on over $2.8 billion dollars worth of transactions for fossil fuels versus $0.1 billion in renewable energy transactions for the years 2016 through 2020.

As a result of their (and others) influence peddling,  Massachusetts saw only 9 of 245 proposed climate bills come to a full vote in the Massachusetts legislature between 2013 and 2018, despite public testimony running 90% in favor of such bills! 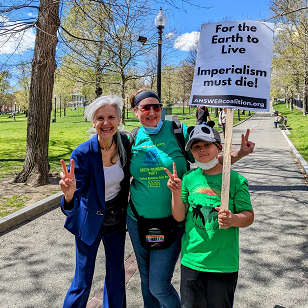 As the crises of climate, war, injustice, and authoritarianism converge to create unprecedented threats to our survival, they also compel unprecedented convergent action to secure the future we deserve. We are very excited to see a grassroots coalition emerging for this urgent purpose. The GRP looks forward to further action with this inspired coalition for people, planet, and peace over profit.