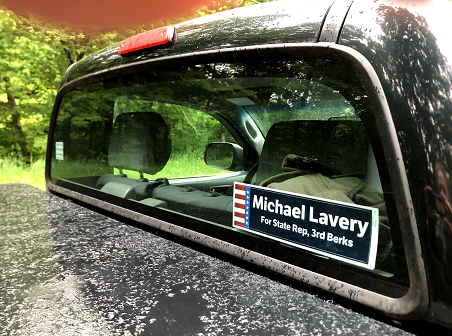 The t-shirts and bumper stickers have been printed and the yard signs are on the way. Michael Lavery’s campaign for State Representative is underway in the 3rd Berkshire District.

On May 6th, Lavery was approved to be on the statewide ballot for November 8th as a member of the Green-Rainbow Party, surpassing the threshold of 150 certified signatures. With the first major hurdle cleared, sights are now set on the campaign’s summer activity.

“Heads are nodding when I talk about my issues,” Lavery says. “I’m treating this as a marathon, not a sprint, but I’m happy with the response so far. I want to move the needle in a different direction, I want to expand the conversation.”

And speaking of conversations, Lavery recently appeared on the podcast Greylock Glass for an hour-long interview about his candidacy. He also had the opportunity to do a meet-and-greet with two dozen voters at the Town Hall in his hometown of Becket, where he has been on the Select Board for five years. Although he is running with the GRP, Lavery was invited to the event by the town’s Democratic Committee.

Lavery will gain further exposure on Saturday, June 18th with the Grand Opening of the Esau’s Heel Trail – a Becket revitalization project he spearheaded that procured a grant to extend the trail, thereby preserving it for public recreation and saving it from being auctioned off by the town. The project was done in conjunction with the environmental youth group, Greenagers, a non-profit organization based in Egremont, MA.

Lavery’s quest for the State House pits him against 20-year Democratic incumbent “Smitty” Pignatelli. Lavery is outspoken about the decriminalization of all drugs, citing the recent positive results that psilocybin has shown for war veterans and others with PTSD. Among other stances, Lavery seeks greater steps towards electric vehicles and renewable energy. He drives an electric vehicle and has solar panels on his home. He is a member of the Democratic Socialists of America.

“As the weather gets warmer we’ll begin our ground game, I’m looking for greater name recognition,” Lavery says. “When people are getting outside and the pandemic is more in the rear-view mirror, picnics and barbecues will pick up, and I’ll be invited to speak. I’ll come out to meet anyone at any event to get the word out.”

Another part of getting the word out means volunteer work. Lavery will need campaigners going door-to-door in his district as well as people making phone calls to registered voters to stimulate interest in his candidacy.

Donations are also of importance. Anyone interested in contributing time and/or money can do so by accessing his website at michaellavery.com. The website provides further explanations of his platform.

“Repetition is important to getting your positions across and our district is large,” Lavery says. “So we can use as much help and support as possible.”