(BELMONT) Secretary of State candidate Danny Factor was arrested today along with three other protesters as they demonstrated against the destruction of the Silver Maple Forest on the Cambridge/Belmont border.  The sound of trees crashing to the ground could be heard in the background as Belmont police handcuffed the demonstrators who had entered the area to ask that the forest be left intact to allow efforts to protect the land to come to fruition. 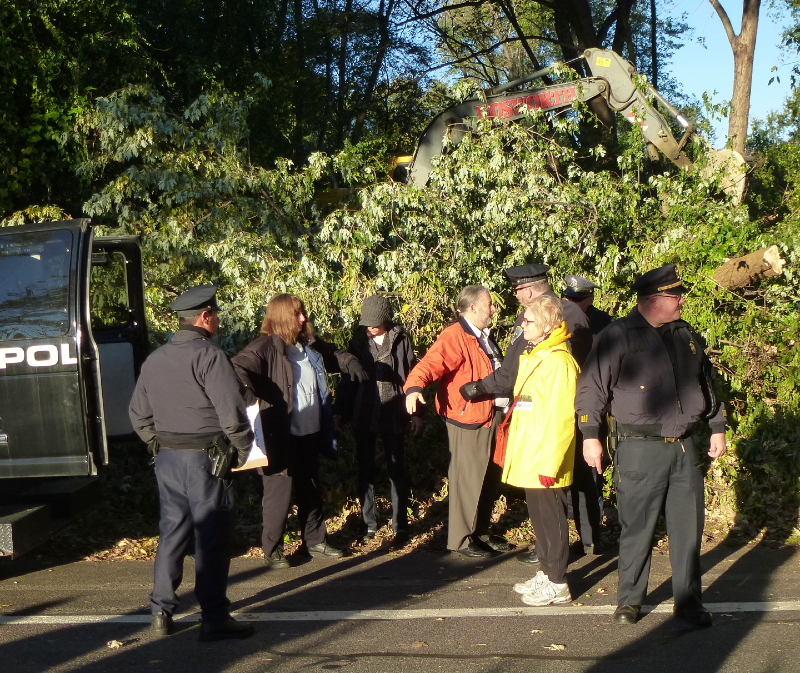 Danny Factor (in orange jacket) is arrested along with other protesters at the Silver Maple Forest in Belmont.

The cutting of trees was part of a pre-emptive strike by O'Neill properties, a Pennsylvania-based real estate developer who wants to build 300 condominiums on the site of the forest.  Although they do not yet have permits to build,  the company apparently feels that if they can clearcut the forest, it will sabotage attempts at forest preservation.

About 50 pro-forest demonstrators stood along the road holding signs and applauding their support as police put the arrested demonstrators into a van.  Monday's arrests followed the arrest of nine protesters at the site in the previous week. 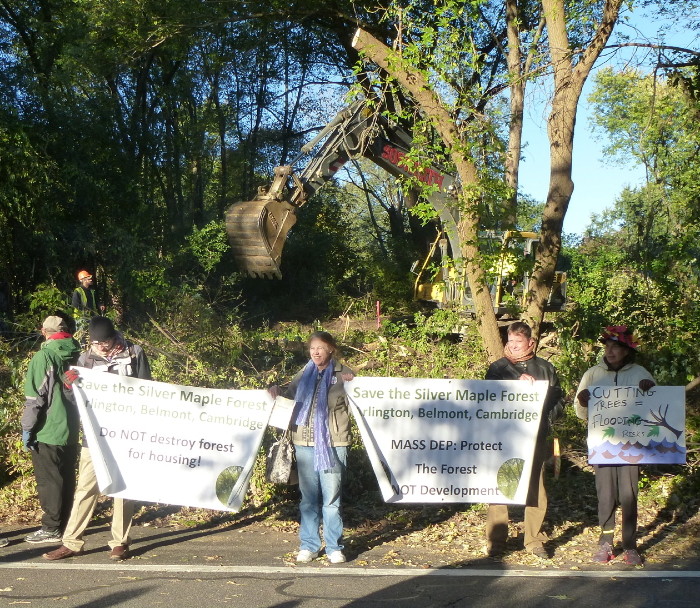 Before he was arrested, Factor explained that "destroying this forest is a terrible land use decision.  An outside developer from King of Prussia, Pennsylvania is using a Chapter 40B exemption to shove aside local planning and destroy a forest that should be preserved for its open space and flood prevention values.  The state and the local communities are trying to come up with a plan to save the forest, and the tree cutting should stop to give them more time to come up with a solution."

Also present at the demonstration was Ian Jackson, an Arlington resident who is currently running for State Treasurer as a Green-Rainbow candidate.  Jackson, who has been to the site several times before to support the preservationists, said  "how sad it is to stand here today and see the crime against reason that is being committed by O'Neill Properties.  The destruction of trees needs to cease and we need to put every effort toward permanently protecting this forest that provides flood control, recreation, clean air, and ecosystem resiliency for our communities." 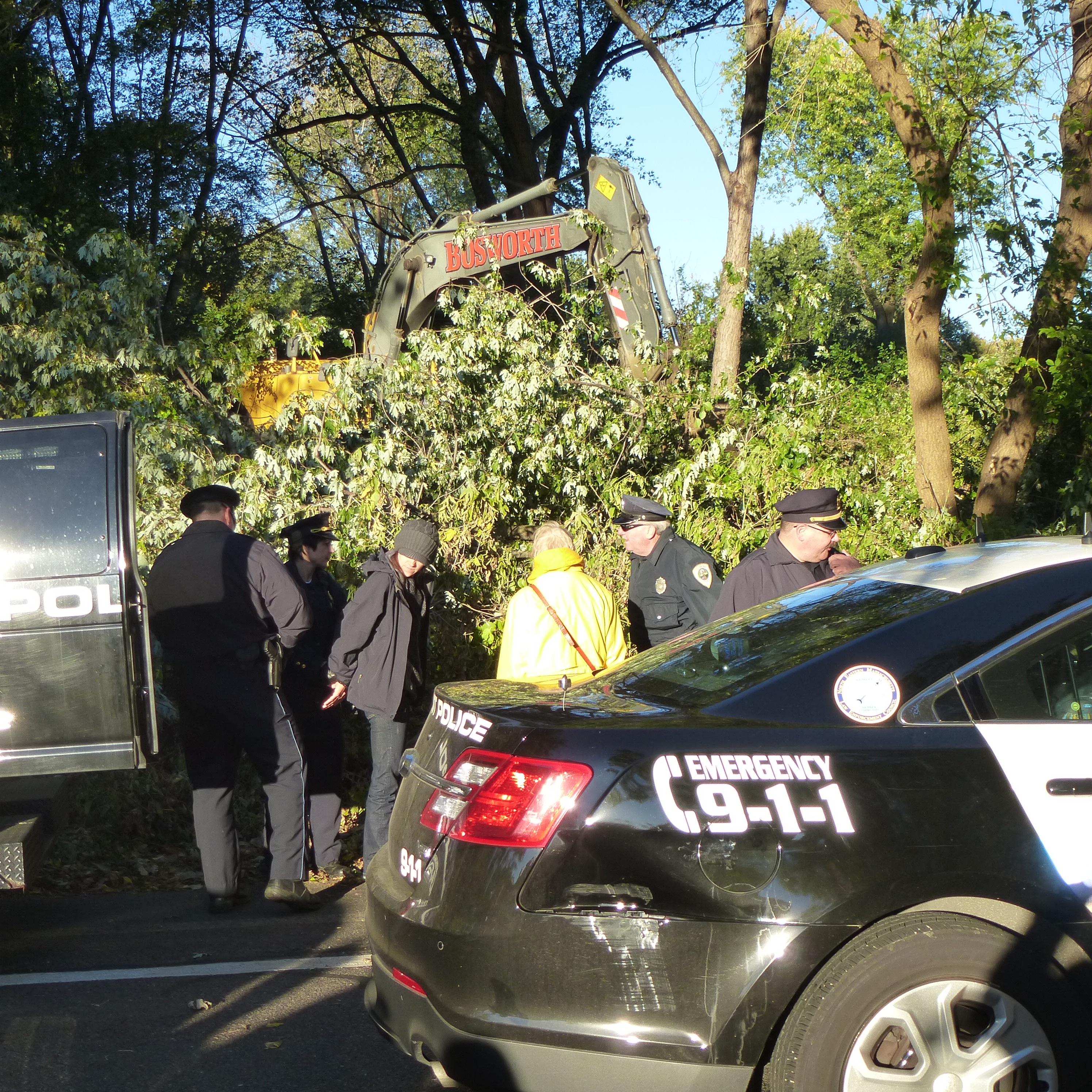 Arrests continue as trees crash in the background.

"What is happening here bears no resemblance to the thoughtful and effective stewardship of our land" observed State Auditor candidate M K Merelice.  "We need to insist that both state and municipal authorities sit down and figure out how to save the forest while producing the low income housing that we need - but which will not be built if O'Neill Properties imposes its plan upon the communities."  Merelice went on to explain that the few "affordable" housing units which O'Neill has offered to mix into their mostly luxury level development would remain beyond reach for low income renters who are most desperately in need of housing.

Just last month the Green-Rainbow Party called for a statewide ban upon commercial logging operations on state-owned lands such as the Quabbin woodlands.  Referring to this,  Factor said "Forests offset approximately 25 to 30 percent of human-caused emissions of carbon and must be left undisturbed in order to do their important work of mitigating climate change.  It doesn't make sense to cut down forests and then spend money on more expensive and less reliable programs to reduce greenhouse gas emissions.  That's why the Green-Rainbow Party opposes logging on our public lands.  And it's why we should try to save as many trees as possible when we have the opportunity as we do here with the Silver Maple Forest.  There is a lot of already deforested land that should be used for housing before we start cutting trees."

"Our candidate team has been traveling the state advocating for a billion dollar Community Uplift Initiative that would put resources for steering development in the hands of local planners" Factor said.  " That would put an end to depredations of hit-and-run real estate developers and let us, through our own democratic decision-making processes, create well-planned, healthy, green communities that have a place for everyone."

For more information on the Silver Maple Forest <click here>.