Results of the statewide election of November 4, 2014

This table is ordered by decreasing GRP vote percentage (obtained by simply averaging the vote percentages of the three candidates).  "Tot Votes" is the number of votes cast for all candidates (using the Treasurer's race as the benchmark).  "KM Pipeline" is 1 if the community is on the route of the Kinder-Morgan pipeline.  "Campaign Activity" is an index from 0 to 2 that roughly indicates the amount of GRP campaign activity that occurred in a community. 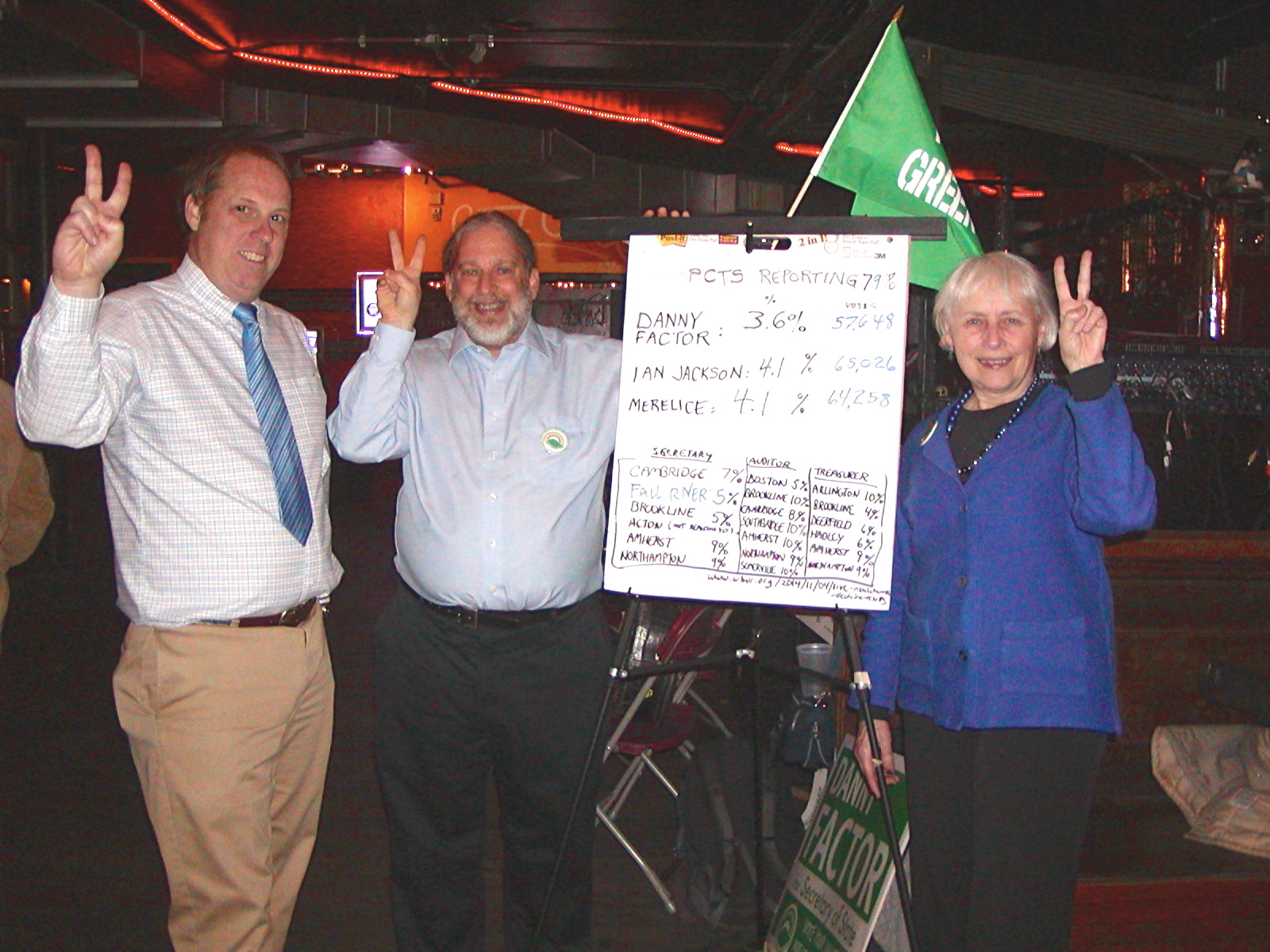 You can cast a courageous vote!

It's decision time.  On Tuesday you will walk into the voting booth and will cast a vote that will leave a highly visible public record of the direction in which you think our Commonwealth should go.  I'm sure you want to vote courageously and make sure your vote sends the right message.

I don't have to tell you that the political class that now holds power is failing us badly on many accounts.  They have created an economy in which 95% of the economic gain has been going to the wealthiest 1% of Americans.  Today 30% of the children in Massachusetts live in poverty or near-poverty.  And rather than address the economic pain, they are saying that more favors need to be done for the super-affluent.  It is no coincidence that the people they want to enrich are those who fund political campaigns and buy television ads.

Establishment politicians have ignored the call to address the developing catastrophe of global warming.  They have instead dedicated themselves to an "all of the above" energy policy that puts fracking for fossil fuels as the top priority.  Their idea of energy progress is to spend $4 billion dollars on a new gas pipeline to bring highly polluting fracked gas into New England.

They are refusing to acknowledge the unaffordable mess that is being created by forcing people to buy health insurance from for-profit companies while allowing big pharmaceutical companies to avoid price constraints.

And they are striking a cruel blow against democracy by allowing wealthy individuals to pour billions of dollars into the buying of elections.  They refuse to even mention the Clean Elections solution that could give us back our democracy.

On November 4, they want you to vote to endorse all these policies.  If you do, then they will breathe a sigh of relief.  They will think that despite all your protests, you aren't really serious about changing business-as-usual.

Why don't we send them a message that they can't ignore?

There are three candidates on the statewide ballot who stand for serious, effective action to address the key crises of our time. They are Danny Factor (for Secretary of State),  Ian Jackson (for State Treasurer) and M K Merelice (for State Auditor).  They are running as members of the Green-Rainbow Party.

Here is what they stand for:

• Scaling back the burning of fracked gas and stoping expansion of gas pipelines. They would instead invest in an expedited transition to clean, renewable energy.

• Fair taxes and green jobs, not gambling casinos that drain money from our Commonwealth.

• Implementing a universal single-payer health care system that provides adequate health care to every resident of Massachusetts while saving billions of dollars in health care costs.  (Most of the developed world has successfully adopted this approach.)

• Rescuing our democracy from the domination of big money by implementing a Clean Elections Law and promoting inclusive debates - not deceptive television commercials - as the best way to inform voters.  (As a sign of their commitment, the Green-Rainbow candidates are running now as clean money candidates by refusing to accept lobbyist money or donations from for-profit CEO's who employ lobbyists.)

Your vote for Danny, Ian, or Merelice sends a clear message that you want to see the needs of people and the planet guide pubic policy.  The more votes they get, the more it will encourage other candidates to take courageous stands for the public good.  If we expect courage from candidates, we must show similar courage in voting our values.

Your vote on Tuesday can be a vote for a new dawn of economic justice and enviromental justice in Massachusetts.  Regardless of how you vote in other races, please join me in voting for the Green-Rainbow alternative for Secretary of State, State Treasurer, and State Auditor.

P.S.  For more information on the Green-Rainbow team, see http://www.green-rainbow.org/candidates

PLEASE FORWARD THIS MESSAGE TO YOUR FRIENDS!