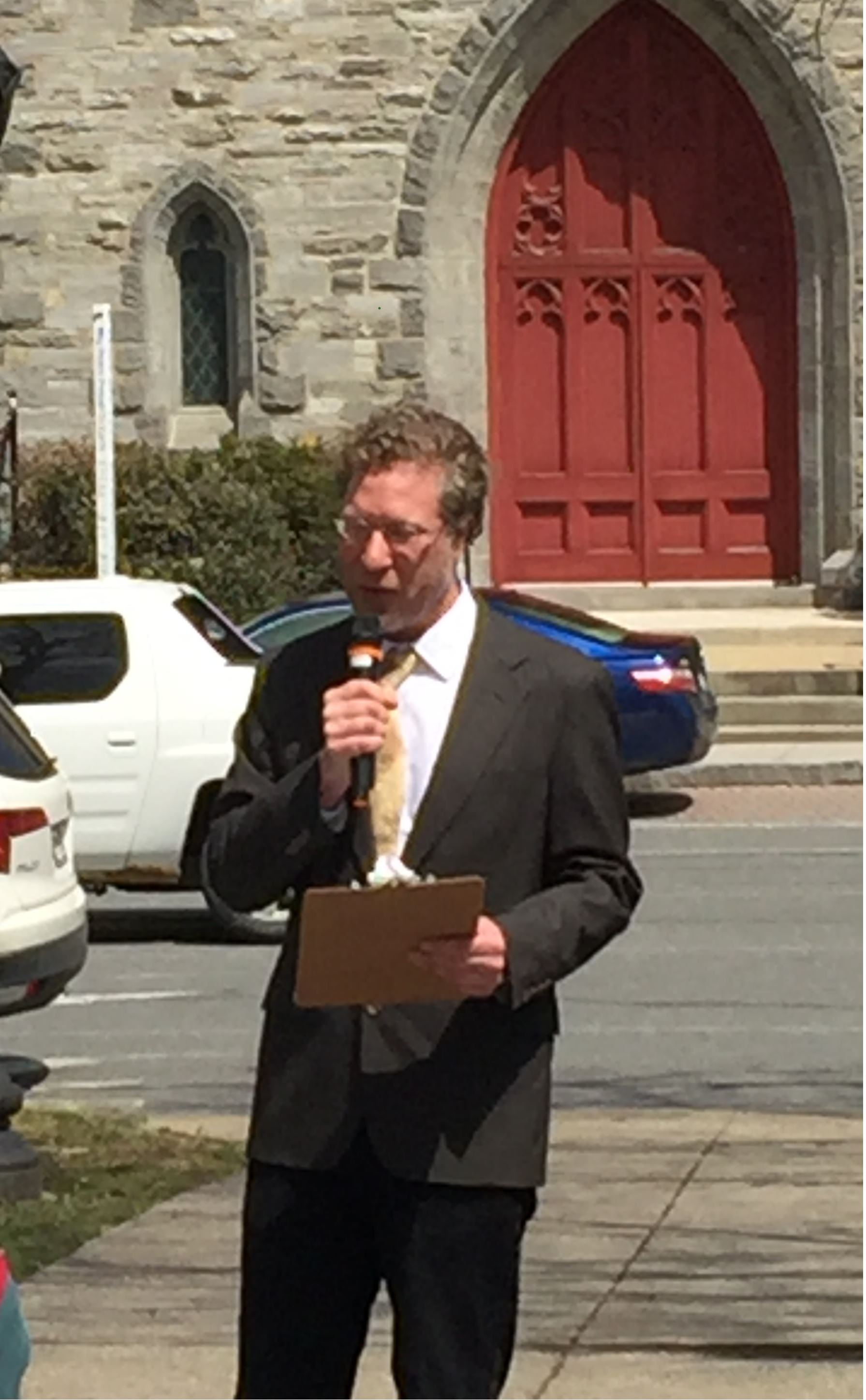 [The following is the candidate’s speech given in Pittsfield, MA on April 28, 2018]

I’m Jed Stamas, I’m running for auditor of Massachusetts as a Green-Rainbow candidate because I care about people, especially future generations. I’ve been a Massachusetts public school educator for over a decade, specializing in physics, math, and engineering skills, and have taught in Boston public schools. I want to see a better Commonwealth that invests its energy toward helping all people. And I believe adults must take the responsibility to provide children with a healthy planet and a healthy economy — starting now.

The purpose of the office of auditor is to ensure that taxpayer money is spent ethically, appropriately and efficiently, and I don’t see that happening in Massachusetts today.

I’ve lived and taught students throughout the state, and in my lifetime, I’ve seen an economic decline. Middle income jobs have become are rarer and rarer, and minimum wage jobs may soon be replaced. Most of us work harder and harder to make ends meet, while government services decline for the poor and disabled. If we don’t make serious changes to our system, and soon, our economic, environmental, and social problems will only worsen.

I’m running for auditor because I believe that Massachusetts can do better. The incumbent auditor, Suzanne Bump, is a Democrat seeking a third 4-year term. I believe it is time to give people another choice — an open-minded Green candidate who cares about the future of ourselves, our communities, and our world.

As a Green-Rainbow auditor, I will be an independent watchdog, ensuring that the Democratic and Republican parties no longer misspend our taxpayer money. Since all government agencies are currently under control of the Democrats in the legislature and the Republicans in the executive branch, the auditor should be someone who lacks any ties to the parties in power. Otherwise, state audits just become pawns in larger political games.

I believe Ms. Bump’s priorities in deciding which agencies to audit are biased and politically motivated.

For example, she audited health care benefits for immigrants and recommended that medically necessary services, like needed prescription drugs, should not be provided.

For example, she has never audited the state police as an entity, even though Massachusetts law requires that “each entity shall be audited at least once every 3 years and an entity shall be subject to audit as often as the state auditor determines it necessary.” Recently internal state police audits released to the media have documented serious financial misconduct in the state police. Some officers were paid overtime for completely unnecessary work, earning as much as $350,000 per year. In context of the nation-wide problem of police misconduct, it is very clear that Ms. Bump is not doing her job here—and may even be in violation of the law.

In addition, Ms. Bump has only audited the DCF (the Department of Children and Families) twice over 8 years; her second audit investigated hundreds of child abuse incidents and found that over half of them were not reported as required by mandatory reporter law. I sincerely applaud Ms. Bump in investigating this.

However, it’s important to note that Ms. Bump’s first audit of the DCF did not find any child abuse. Apparently, she did not make it a priority to do so. She has been accused of using the DCF as a “political football” by not accepting responsibility for DCF problems and instead “passing” those problems to Republican Governor Baker, rather than working together with him reform the DCF. As a Green-Rainbow auditor, I will audit the DCF on an ongoing basis to ensure that children are being protected.

Ms. Bump, like most Democrats and Republicans who run for state office, ignores federal issues, especially those having to do with foreign policy and human rights. But yearly, tax payers in Massachusetts hand over $13 billion for future military spending, a number greatly inflated by neoliberal, interventionist foreign policies in the Middle East. These pro-war policies kill and main innocent children and incite hatred against the US, making the entire world less secure. Meanwhile, state social services agencies struggle to keep up with the mental health and economic needs of Massachusetts veterans. As auditor, I will investigate the impacts of these wars and recommend that the federal government invests taxpayer resources into helping people instead.

We don’t need more problems, we need solutions. The Massachusetts Green-Rainbow Party, along with the world-wide Green movement, thinks that the solution is to invest in ourselves.

For example, we can invest in science, engineering and computer education and use it for clean energy, sustainable transportation, and high quality health care for everyone.  We don’t have to siphon off our most valuable resources for military operations overseas.

Our schools can provide all students with the skills they need for the economy of tomorrow, instead of a competitive system of winners and losers. Because no serious project can succeed without cooperation!

If elected, I will audit the state’s elementary and secondary education system and provide my best recommendations as to how every student can enjoy learning and graduate economically prepared.

Most importantly, if elected, I will ensure that Massachusetts state audits reflect the values of the Green-Rainbow party: grassroots democracy, ecological wisdom, equal opportunity, and non-violence, ensuring a world in which future generations can thrive.

And given the all our problems in 2018, now is the time to take action. We believe that working together democratically is the answer.

Let’s come together as a team and defeat the corporate oligarchy on Beacon Hill!