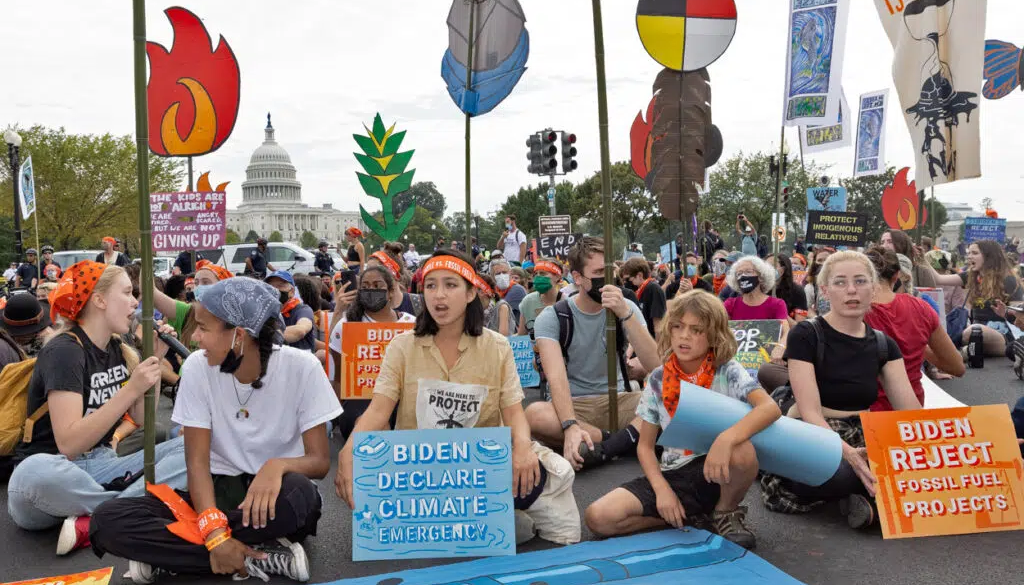 After 6 years of wrestling with the Paris Agreement to reduce fossil fuel consumption and in other ways stem the decline of life on Mother Earth, President Biden and his fellow leaders must again address the failure of major polluting nations to stem their toxic emissions.  The Green-Rainbow Party has joined with other environmental activists to condemn the high-sounding rhetoric and the absence of real actions.

In Washington, before President Biden and his administration left for Glasgow and the COP-26 assembly, environmental groups, notably indigenous and youth movements, ringed the White House and other locations to demand real action.  Over 650 protesters were arrested, despite the deafening silence of the mainstream media.

COP 26 reviews the status of promises made in the 2015 Paris Climate Accords and updates the commitment of each nation to meet the goal of no greater than a 1.5-degree temperature increase by 2030.

1) What does the US bring to the table at COP 26? Our delegation goes to Glasgow with what? We tried. We had a $3.5 trillion plan that included some progress towards climate stability, but that damn coal miner from West Virginia won't let us do it! Sorry world! Maybe we can pressure the global south into making a greater sacrifice by their people to cover our deficit.

2) With minimal coverage of COP 26 in the US, how do we raise public awareness and confront our government's complete lack of urgency? What coalitions should we be joining to organize the necessary momentum to change? After all, we are the only, truly environmental political party with a platform and program to stem climate extinction.