“Too often, we vote for the same people upon the premise of experience. 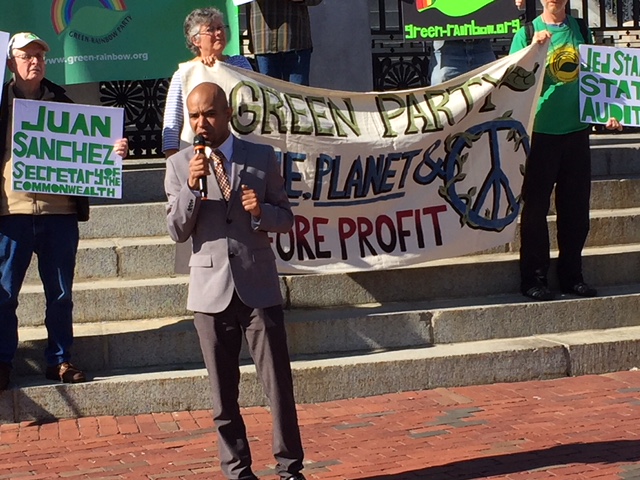 However, that experience should be called into questioned when incumbents like Galvin use their long time power and office resources their own advantage.  When we find out that the head of our elections division is staffing his office with convention delegates loyal to his party and using them to do campaign work during office hours, it raises a red flag. He’s responsible for ensuring our electoral integrity and he’s the one that is breaking the rules.

The number of staff involved in the Galvin scandal – 13 – is especially worrisome. They were taken away from their regular duties to help the incumbent Secretary of State maintain his position in the upcoming primary. Let us not forget that these positions, including the Secretary of State post itself, are paid with taxpayer money that is supposed to be spent on people serving the Commonwealth, not doing the Secretary’s bidding.

This type of abuse is not a one-time occurrence in Massachusetts. Both State Auditor Suzanne Bump and State Treasurer Deb Goldberg were also included in the abuse of power piece in the Boston Globe. I believe this speaks to what happens when one party and one individual are in a power position for too long. It would seem our state Democratic Party officials are comfortable with curtailing the rules that they are not only supposed to follow but also enforce.

The Green-Rainbow Party stands with every taxpayer in calling for integrity, transparency, and proper use of our public funds.  We demand an investigation into the current staff composition in state offices to determine if the electoral process is being compromised, fair hiring practices have been followed or public jobs are being awarded preferentially to operatives in one political party.

If elected as your next Secretary of the Commonwealth, I pledge to reform hiring practices, ban all campaign work during regular office hours and ensure electoral integrity by keeping any office staff from working on my own campaign. I pledge that every job applicant will be treated fairly and every state employee under my supervision will be working for the people of the Commonwealth and not to advance my political career. I will work with the Attorney General, Inspector General and the State Ethics Commission to ensure that all state offices comply with rules defining the use of state employees and prevent these abuses from ever happening again. I will also retrain state employees on both ethics and campaign laws.

This is a reminder that we should always be looking for alternatives to long-term incumbents to keep democracy vibrant in Massachusetts. And, we must choose officials that will ensure that our tax monies are being invested in our citizens. Let's return our state offices back to the people and not let them be used as tools for career politicians.”

This statement was also endorsed by the Green-Rainbow candidates running for state office – Jamie Guerin for State Treasurer, and Jed Stamas for State Auditor.