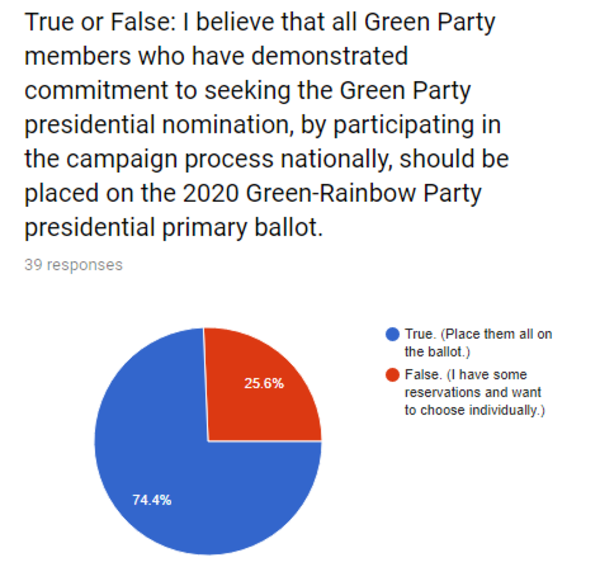 1. I requested the Voter File from the Secretary of the Commonwealth on January 2, 2020. We will need it to inform GRP Membership about our primary.

2. Juan Sanchez has resigned from CDLC, Renaming Working Group, and as GRP Observer to GPUS National Committee. He said the infighting has left him disheartened, but he will remain a loyal GRP member and wishes us well.

3. I attempted to gain insight into GRP Membership re: who to place on the GRP Ballot by creating a poll.

I was hoping for wide participation which I could present to Adcom as GRP Membership input on 2020 Primary Ballot creation. If there was enough support, perhaps the GRP could submit a modified list to the Secretary of the Commonwealth Elections Division before the statutory deadline of 5 PM on January 3, 2020. I curated what I believe to be 39 legit GRP participants and, based on my poll which yielded 39 legit entries, all candidates were placed on the ballot by the GRP Membership!

(Adcom ignored these results as well as vocal dissent from GRP members and chapters over the limited ballot list, which only listed 4 out of possible 8 candidates. Candidate placement was decided by a 2/3 vote among 17 Statecom members.)

4. I learned something very important from this endeavor. My poll was created using Google Forms. Someone was submitting obviously fraudulent emails, which were easy enough to weed out. But anyone with knowledge of other peoples' emails could very easily hack my poll where I wouldn't be able to tell if they were real or not.

It turns out that the GPUS PCSC is using the same data collection method for candidate signature gathering.

Rules and Procedures of the Green Party of the United States

6. I found a Statecom-approved Bylaws Amendment that was never inserted into the Bylaws.

7. Here is another bylaw amendment that was never inserted.