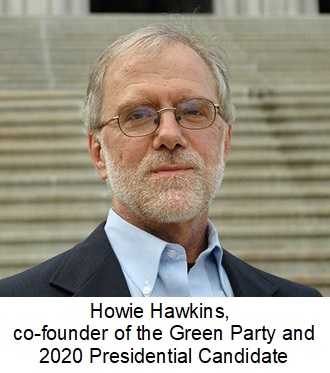 What became the Green Party of the United States had its first national conference 35 years ago in Massachusetts. “Building the Green Movement: A National Conference for a New Politics” was a six-day marathon that ran over the July 4th weekend from Thursday, July 2 through Tuesday, July 7 at Hampshire College in Amherst.

Three years previously, a network called the Committees of Correspondence had been launched in ST Paul, Minnesota. The 10 Key Values were adopted there as the basis for organizing affiliated local groups. By 1987, the network had about 75 local groups.

The Amherst gathering sought to bring together all who were interested in Green politics for a wide-ranging exchange of ideas and perspectives. The conference included nine plenary panels and 120 workshops. About 1,500 people attended. Speakers included Mark Satin, author of New Age Politics (1979), and Charlene Spretnak, author of Green Politics (1984), the drafters of the 10 Key Values. The Left was represented by eco-anarchist Murray Bookchin and veteran socialist and black liberation activists James and Grace Lee Boggs. Novelist and peace activist Grace Paley spoke. Independent progressive politics was represented by Mel King of the Boston Rainbow Coalition, John Rensenbrink of the Maine Green Party, Dennis Boyer of the Wisconsin Labor-Farm Party, and SNCC veteran Gwen Patton of the National Committee for Independent Political Action. Members of Indigenous nations spoke, including Wampanoag John Peters.

The conference had strong international participation. Green, democracy, and peace advocates from around the world spoke, including Jutta Ditfurth, of the German Greens; representatives from the Brazilian Green Party, and from the Moscow Trust Group; a Polish peace activist; and an Australian Green eco-feminist. The New York Times ran a front-page story about the conference on July 6, 1987, where, as an organizer of the conference, I was quoted as saying the groups represented at the conference were “a political party struggling to be born.” Thankfully, we did birth our party.

And thanks to Massachusetts Greens for hosting this pivotal event in the Green Party's development.

Thank you, Howie Hawkins, for this informative and inspiring review of our history.  Looking from the present to the past, we see the depth of our roots and the breadth of our base.  We can feel the excitement of those early efforts. The years have worn upon us but we realize that the need is greater now than ever, the embers are still glowing, and a recent blast of fresh air has rekindled the fire.   We refer to the December 10th “Converging Crises and Collaborations to Fix Them”  conference at the Community Church of Boston. This conference, brought together by a coalition of social action groups and the Green-Rainbow Party was a giant step towards rebuilding the collaborative progressive movement in Massachusetts.  With a brilliant framing of the crises we face,  Dr. Jill Stein of the GRP presented facts and figures which informed and inspired the broad range of activists to collaboratively build the people power necessary to save the planet and restore American democracy. This was a clarion call to action, an acknowledgment of the necessity to work together to avoid climate collapse, perpetual war, and devastating human inequality.

Our history is inspiring.  Our efforts for the future are essential and now is the time to start.