The Tragic Consequences of "Out of Sight, Out of Mind" 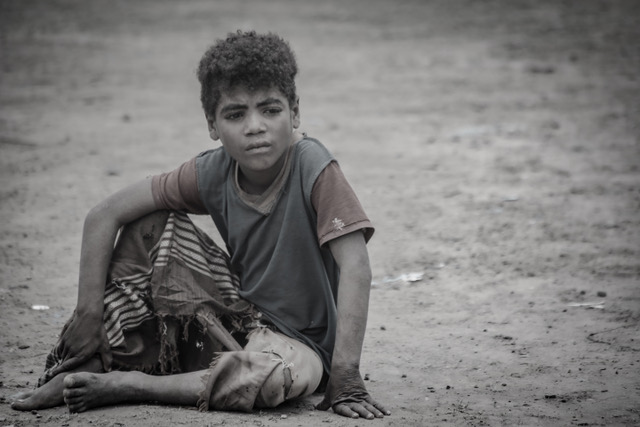 "Out of Sight, Out of mind" is an old adage that purveys a great deal about the current state of our affairs. It is a dangerous state of mind that allows much global suffering brought about by the few with a blind acquiescence by the many. Over the span of our lifetimes it has resulted in genocides, environmental destruction, and needless worldwide suffering.

The case in point: Drone warfare, global network of black site prisons and torture, clandestine CIA and private mercenary wars throughout the world, military support for foreign countries at war with their neighbors or their own citizens, crushing economic sanctions that are "acts against humanity", persecution of journalists who present truth. But "out of sight, out of mind" keeps these tragic assaults on our humanity as vague notions of protecting "our interests''. This is part and parcel of our political/military/corporate rulers maintaining control. It is tragically reinforced by a compliant mainstream media. But despite our "out of sight, out of mind" acquiescence, it does not excuse us from responsibility. Based upon the principle of a common humanity, we are all on the continuum of perpetrator to victim. On this continuum, the perpetrator and their acquiescent supporters may feel a sense of security but in reality acceptance of violence anywhere slowly seeps into our foundational beliefs leading to acceptance of physical and emotional violence that undermine our culture and brings death and destruction to our own shores. As evidence, I offer the increasing occurrences of mass shootings within our borders, increasing economic inequality, a deterioration of societal stability and humane cultural norms. We continue with a sense of "out of sight, out of mind" at our extreme peril.

So let's take a look at that which we have chosen not to see. War has been raging for 6 years in the small country of Yemen. What had been an internal struggle became internationalized when Saudi Arabia took sides. Since their involvement, the situation has turned into one of the worst human tragedies of current times.: bombing of critical civilian infrastructure, devastation of agricultural production, a blockade prohibiting the importation of critical supplies to ameliorate starvation and epidemics. The US is not a passive observer of this daily terror. We are active participants in this ongoing human tragedy. Our Commonwealth is one of the epicenters of the US military/industrial complex. We receive $15 billion + in military contracts annually and employ approx. 42,000 in war related industries. This is a lucrative web that ensnares our citizenry and our tax dollars in war and terror that we would reject if we had a voice . Yes it is a complex web. But awareness is the first step of change. This article is intended to increase the awareness of "war" in our own backyard

GRP: Paul, Massachusetts is one of the high tech centers in the world. The military aspect of this high tech economy employees 42,000 workers with high salaries across the industry. It is a major component of our dynamic economy. However, there is a deeper, darker side to this story. Can you fill us in on that?

P.S.: Yes. There is a darker side. The question is not so much how many good paying jobs are created, but rather what is the nature of those jobs? As stated, Massachusetts receives approx/ $15 billion a year in military contracts. In addition to that $15 billion, companies like Raytheon – headquartered right here in Waltham, make billions in direct arms sales to Saudi Arabia and other repressive regimes. It is these arms sales that have sustained Saudi Arabia’s 6 year assault on the people and infrastructure of Yemen where tens of thousands have already been killed or starved to death by bombing and blockade. Hundreds of thousands more are on the verge of starvation right now. This is a humanitarian tragedy, supported by both our tax dollars and the selling of devastating weapons by a key institution in the Massachusetts economy. We are all co-participants in this war.

Our efforts at the Raytheon Anti-War Campaign is to bring home the reality of this humanitarian crisis. Raytheon Technologies is the second largest arms developer in the world. It is headquartered in Waltham, MA with administrative offices and manufacturing facilities spread through not just Massachusetts, but the world. It is the campaign's ongoing goal to increase the public awareness re; not just Raytheon's role in support of the US/ Saudi Arabia collaboration in the Yemen war, but to highlight the destructive nature of our entrenched Military Industrial Complex. To underline the nature of the "Military Industrial Complex, Raytheon provides a classic case in point: Our current and just previous Secretaries of Defense come from the Board and Executive suites of Raytheon Technologies. This obvious convergence of world view is clearly at odds with the needs of peace and security in the world.

GRP: Paul, you have been in this effort for many years. Do you feel that there is an increased awareness of our citizenry, state political leaders, including our congressional delegation, as to this dark side of the story? Are they apt to do anything to alter this course?

P.S.: I would love to say yes, but in reality it does not appear so. The anti-war movement is weak throughout both our state and country. It is essentially ignored by the mainstream media. The positive point to build upon is that there are increasingly active and growing social action movements. Many share anti-war values and are supported by a wide range of the public as indicated by broad based public opinion polling. Our job is to build this into a strong coalition that incorporates them into an anti-war movement. Whether your primary issue is environment, healthcare, education, you name it, until we significantly reduce our military budget and change our national agenda from domination to cooperation, there will be no dollars available for these essential needs.

GRP: What role does the mainstream media play in the mindset of "out of sight, out of mind"?

P.S.: Unfortunately with the lack of an objective, critical mainstream media our current means of warfare remains below the public's radar. The role of our movements must be to expand public awareness and develop strategies that change our government’s underlying values of competition and domination with cooperation and mutuality.

GRP: Mass movements within the US have been far and few between in recent years, notable exceptions are the Black Lives Matter movement and the recent national and global demonstrations in support of the Palestinians. Can you foresee a sustained national peace and justice movement growing in strength and influence in America?

P.S.: We have no choice. As Frederick Douglas is quoted: "Power concedes nothing without a demand. It never did and never will". We, the people must make the demands and back them up with increasing people power. Polling shows public disdain for perpetual war, failing infrastructure--physical and social--, increasing wealth inequality, and deteriorating environment gaining traction. What is now lacking is the organizational structures to move this cause forward. This is our mission.

GRP: Thank you Paul for both your thoughts and time for this interview as well as your ongoing efforts.

We must realize that every dollar spent on war and war preparation is a dollar unavailable to our internal, domestic needs: education of next generations, healthcare for all, sustainable and sufficient healthy food production, democratic technology development and application for the benefit of all, housing, environmental action, etc. This is the theft of a healthy future forour next generations. As Paul Shannon suggests in the above interview, it is time to build and/or join a coalition committed to peace and justice for all. We must resist war, war preparation in all its forms and a political leadership that provides no alternatives.

As Green Rainbow Party activists, members, supporters, friends and acquaintances , as any living being sickened by our perpetual wars and human destruction, we must develop both individual and collective action plans:

Further resources: YouTube: War is all around us: The War Industry in Massachusetts and further: Christian Sorenson”s web page: WarIndustryMuster.com

Note: The Democratic Party was eager to enact a War Powers Resolution under the Trump administration , demanding cessation of US support for Saudi Arabia’s war on Yemen, but are tragically slow or silent when it comes to challenging their own president. This politicization of human suffering by both of our major political parties is unconscionable.

There is no single approach or action that will simply turn the war machine off. .Education, increasing awareness and collective, repeated and sustained efforts are essential for reversing a 400 year history and continuing policies of humanity destroying imperialism.