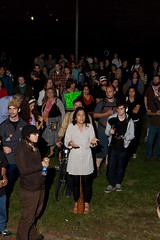 I wondered when it would happen.  But I knew it had to happen.  Finally, the people are rising up.  Finally, they see that they cannot look to either the Democrats or the Republicans to care about them.

There will be no justice, no peace, no fairly shared prosperity, until politicians can be held accountable. And without a choice at the ballot box, politicians can make promises first, excuses later, and abandon us with impunity.  They know we have nowhere else to turn.

It is time for a third party. High time. But fearful of being "spoilers," people cling to their unsatisfactory mainstream Republicrat options election after election, and the cycle produces worse results each time.

We need Instant Runoff (ranked-choice) Voting, so that other parties can become viable alternatives and thus create true political accountability. With IRV, you can vote for the candidate and the platform you really want, and designate your second choice, so that if your real favorite trails, your vote is transferred to the mainstream candidate you merely dislike, rather than leaving the advantage to the candidate you detest.

Until we get that (and the Republicrats will block it as long as they can), we have to vote bravely for what and whom we believe in, understanding that in the long run, voting for the lesser of two evils just makes both evils worse and worse -- until we get a sell-out like Barack Obama as our "better" choice!

I've joined the Green Party of the United States, after years as an Independent, free to vote for anyone -- and no one to vote for.  It's not democracy if you have the right to choose but your options are chosen for you by the corporations and the plutocratic elite they've created. If we want to send a message, yes, we have to rise up, take to the streets, Occupy America and win the changes we need -- but then, we have to support the political structure that will preserve what we win. We cannot go back.  Republicrat domination, the puppet government of the corporations, has to end.  What do we want to see in its place?

If you want to send a message they'll really hear: REGISTER GREEN by becoming a member of the Green-Rainbow Party, the Massachusetts affiliate of the Green Party of the United States.  You don't give up your choice on election day -- but you'll sure get their attention now!