(Boston, MA) - Danny Factor is running for Secretary of State.  But this weekend he took a break from the campaign trail to join 310,000 other marchers in the climate convergence march in New York City.  As the multitudes gathered, Factor spoke to the Green Party segment of the march which included many Green-Rainbow Party members from Massachusetts.

"I joined the march because I know that stopping climate change is absolutely critical if we are to leave a habitable planet to our children." Factor explained afterward.   "Today's climate convergence is a milestone.  Today the social justice and environmental protection movements join hands to form an unstoppable force for justice and for our survival.  The oil and gas industries - and their big money backers - are powerful.  But when faith groups, anti-poverty groups, grassroots community groups, and indigeneous people come together with environmentalists as is happening on this march,  they form a force that can change policy and save our world." 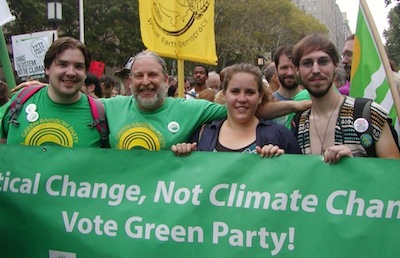 "Scientists have told us that in order to save the climate we must leave three-quarters of known oil and gas reserves in the ground.  This means that President Obama's 'All of the Above' energy policy must be stopped.  That policy is expediting fracking, restarting deepwater oil drilling, and pushing for more fracked gas pipelines.  If that policy is not reversed,  it is absolutely certain to destroy the climate of our planet."

Also speaking to the marchers were Elizabeth May, Green Party member of the Canadian parliament,  Howie Hawkins, Green candidate for governor of New York, and Jill Stein, 2012 presidential candidate for the Green Party.

Factor noted that in Massachusetts the Green-Rainbow Party is the only political party that has taken a clear stand against the Patrick Administration's efforts to build a new fracked gas pipeline across the state.  "If this plan goes forward, electricity ratepayers would see their electricity bills increased by about four billion dollars in order to build more long-lived fossil fuel infrastructure.  This is exactly the wrong direction for our energy policy.  Instead, we have to invest in conservation and renewable energy, and if we do so, expansion of gas pipelines will become unnecessary."

Ian Jackson, the Green-Rainbow candidate for State Treasurer praised the climate marchers and noted that "the State Treasurer is responsible for investing over $46b in state funds.  As Treasurer, I would work to divest from fossil fuels and instead invest in the sustainable energy systems we need to save our planet."

M K Merelice, Green-Rainbow candidate for State Auditor agreed, noting that "a society that relies on renewable energy is more stable and more just.  It will create more jobs than we can get from fossil fuels and it will do so while giving us cleaner air, cleaner water, and a healthier environment."

Links to GRP candidate websites can be found at http://www.green-rainbow.org/candidates 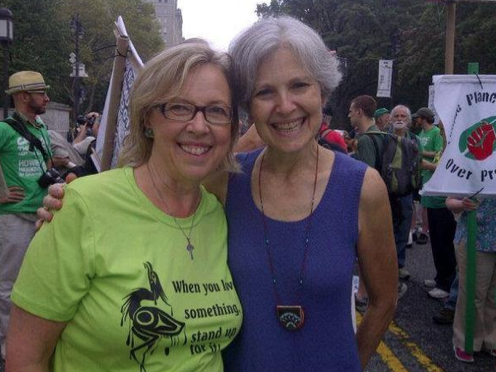 International agreement!:  Elizabeth May, Green Party Member of the Canadian Parliament,
greeted by Jill Stein, 2012 presidential candidate for the Green Party of the United States.